Mac mini Server RAID 0 vs. RAID 1 vs. other Macs 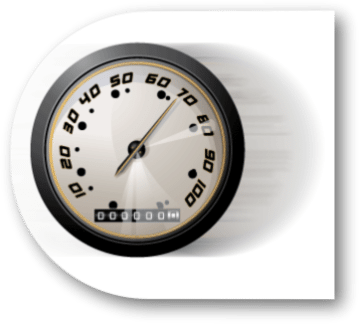 mac-fusion has a new Mac mini with Snow Leopard Server. It ships with (2) 500GB hard drives but it’s not configured as any kind of RAID. We wanted to know how the redundancy and reduced capacity of a RAID 1 compared to the speed and size benefits of running a RAID 0. We also wanted to find the baseline speed of a non RAID setup. So we pitted the mini against itself and several other Macs for good measure.

We used Quickbench 4.0.4. It says it’s Leopard compatible but there’s no mention of Snow Leopard. That would really be a drag if all this data was not valid. But unfortunately the developer’s support forums have been offline all week so we’ll go with it for now. We ran the Standard test using transfer sizes ranging from 4KB to 1MB and taking the average. We did 5 passes to try and even out any big anomalies. All machines were tested after being rebooted, and, except for the Xserve with SSD, all servers were running a minimum set of services. We threw the Xserve SSD in just to see if the MacBook Air SSD performance was hobbled at all. Results are in MB per second. 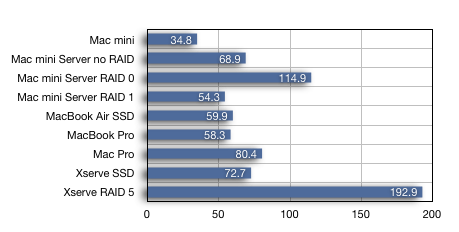 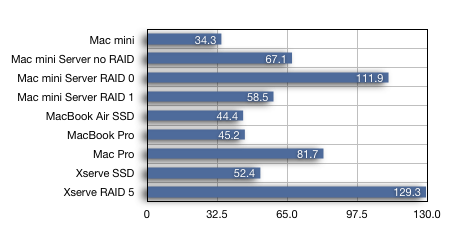 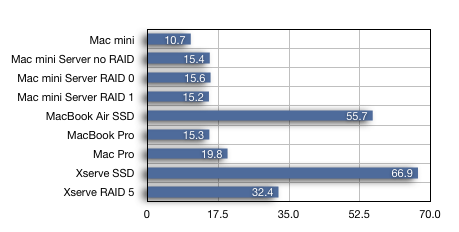 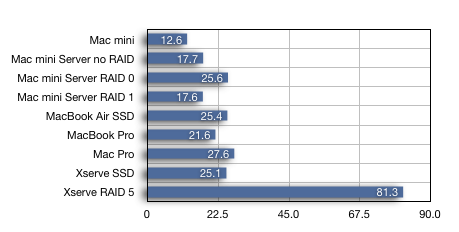 It’s no surprise that you get what you pay for and the Xserve with RAID 5 Donkey Kongs the others in all but Random Read, although not by a huge margin. But if you’re supporting a workgroup of more than a handful of people and providing a broad range of services, it’s the way to go. The MacBook Air w/ the SSD drive puts up some pretty solid numbers in the Random Read area. That’s the nature of SSD. And that’s what makes it feel pretty sporty compared to a regular HD. But it’s still slower than a production Xserve box with an SSD. I don’t know if that’s the drive or the bus or something else but would love some comments on that.  Even though the old mini didn’t come anywhere near saturating it’s limited 1.5Gbps SATA bus, I don’t think it helped anything. That thing is S L O W. The Mac min Server however is much faster even with a single drive. But, to address what we set out to find, if you’ve got a good backup plan in place, the size and speed benefits of a RAID 0 seem to be justified offering nearly 2x the performance in both sequential tests, a small boost in Random Read and nearly a 50% gain in Random Write.